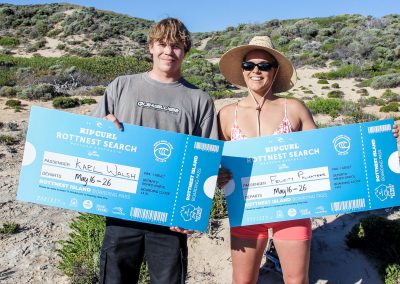 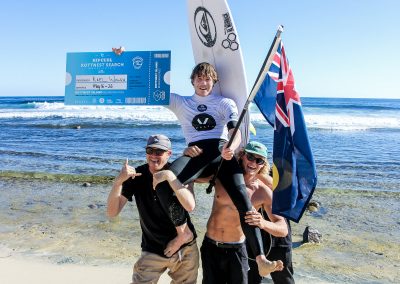 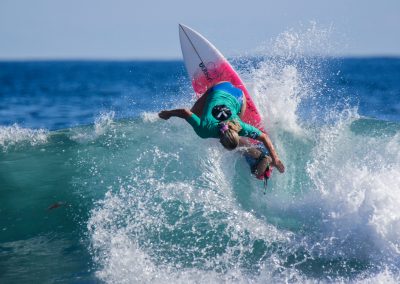 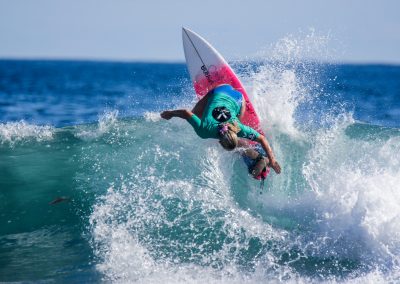 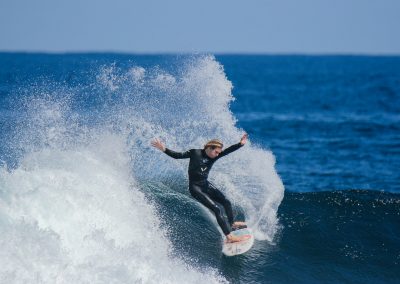 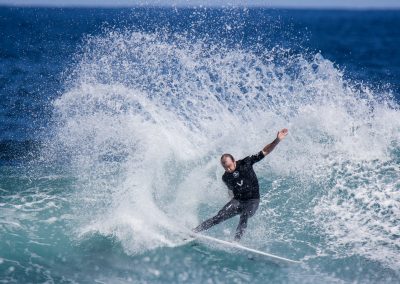 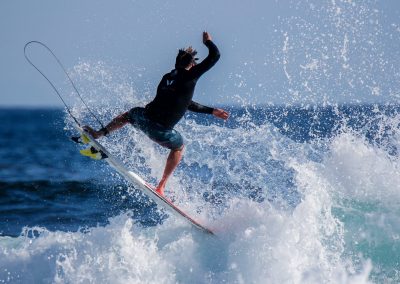 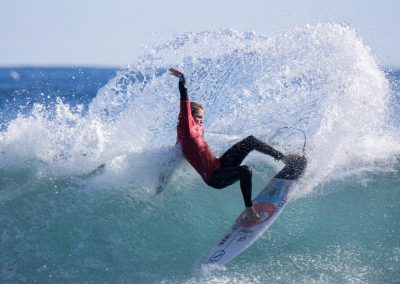 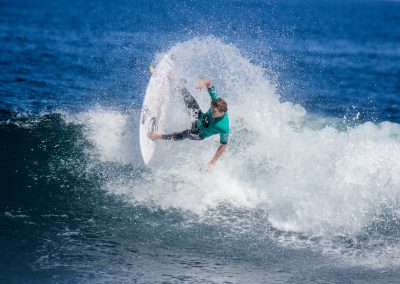 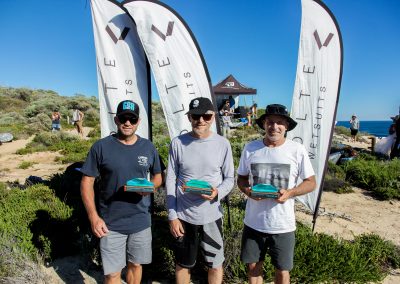 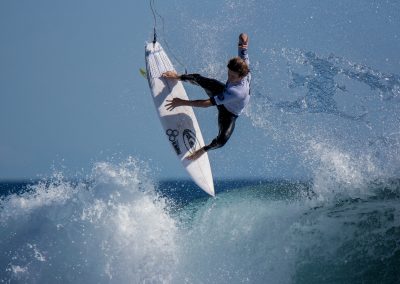 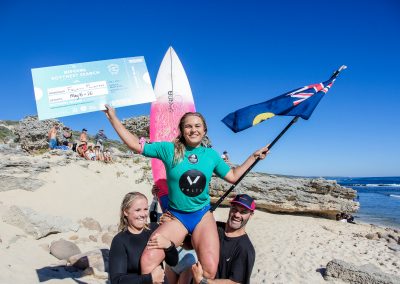 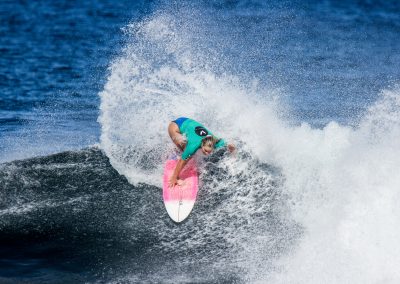 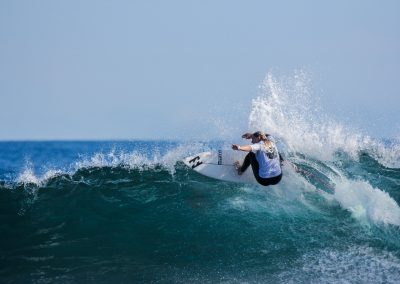 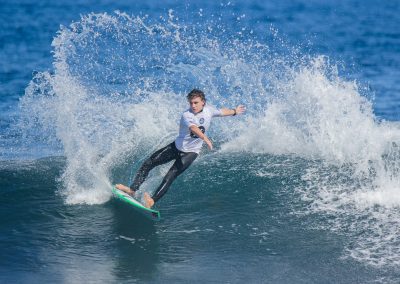 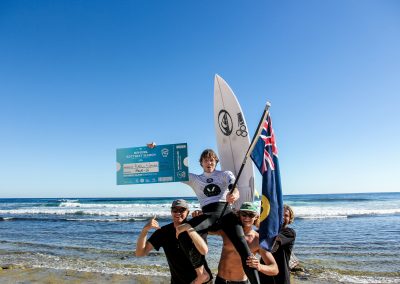 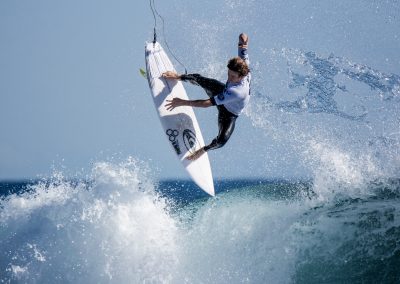 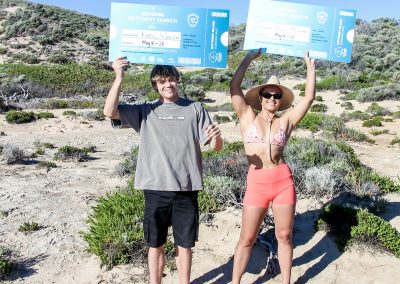 Margaret River’s Felicity Palmateer and Yallingup’s Kael Walsh have confirmed their positions as the two local WA wildcards for the upcoming World Surf League (WSL) Championship Tour (CT) Event on Rottnest Island in May, by claiming victory in pumping conditions at the opening event of the Volte Wetsuits WA Surf Masters Titles presented by SunSmart.

In an exciting turnout of local and grass roots surfing talent, the weekend provided non-stop highlights as surfers from across WA converged on Big Rock in Gracetown for what was an epic and inspiring display of surfing in quality waves.

A small swell forced the event to leave Surfers Point in Margaret River and go mobile in search of the best waves along the South West coastline and the back of Gracetown provided near perfect competition conditions, with 2-4 feet waves on offer and little to no wind all weekend.

Former CT surfer and big wave charger, Felicity Palmateer had to draw deep from her years of competition to win the Open Women’s division, taking down a crop of WA’s best female surfers to book her spot into the Rottnest Search event. Palmateer peaked when it mattered most, dropping two excellent scores in the final to finish on a combined two-wave total of 17.50 (from a possible 20), which included a 9.50 and 8.00.

In an inspiring exhibition of West Australian female surfing, Palmateer was too strong for Mia McCarthy (Margaret River), Emma Cattlin (Yallingup) and Coral Durant (Red Bluff), who all performed well, but were left chasing excellent scores in hopes of claiming the win.

“I’m so, so happy, Rottnest Island is one of my favourite places in the world and to have a CT event there will be amazing,” said Palmateer. “I haven’t won something in a long time and now I get to compete against some of the girls that I grew up surfing against on the Qualifying Series, it’s been a while since my last CT event, but I can’t wait to do it all again.”

Yallingup’s Kael Walsh proved he’s got the x-factor needed to mix it up with some the world’s best surfers, securing his position into the Rottnest Search event, with a dizzying display of aerial surfing that saw him take to the sky, posting a flawless 19.35 (from a possible 20), on his way to his first competitive win since 2018.

Walsh, a former Australian Junior Champion has experience at the elite level, competing in the 2018 Margaret River Pro after winning the Drug Aware Local Trials that year. Since then Walsh has battled injury, dropped amazing edits and fine tuned his air and rail surfing to take on the world’s best.

Walsh dropped a perfect 10 in the final and backed it up with a 9.35, with some amazing forehand airs, one of which had the beach going crazy. Walsh continued to apply scoreboard pressure early and despite some excellent surfing from Jerome Forrest (Margaret River), Max Marsden (Geraldton) and Cyrus Cox (Margaret River), all three surfers were left chasing a combination of scores for the win.

“It was a sick final, all the boys were ripping, I haven’t competed in a while but when I heard that a CT spot was on the line I wasn’t going to miss out,” said Walsh. “The waves have been so good for an event and I surf this stretch a lot, thanks to all my friends for getting down to cheer me on.”

Surfing WA Events Manager was thrilled with the calibre of surfing on offer and the two highly-sought after positions brought out the best in Western Australian surfing over the weekend. “That was a truly memorable event with some world-class performances to match, logistically this location has its challenges, but its such a great competition venue,” said Majeks. “I wish Felicity and Kael the very best of luck and I’m sure they’ll represent WA to the best of their ability on the global stage in May.”

A host of different age divisions highlighted what an amazing weekend of surfing, with competitors coming together from right across WA in hopes to claiming a prestigious State Title and representing WA at the Australian Surf Championships scheduled to be held in Port Macquarie, NSW in August.

George Simpson (Gracetown) took out the hotly contested Under-21 Pro Junior division, using his home ground advantage to take the win and continue his rich vein of form in 2021. Jesse Molloy (Secret Harbour) was the best of the Over-35 Masters, edging out his rivals for a win by the narrowest of margins.

Paul Paterson (City Beach) showed his love of competition surfing, claiming an impressive double victory in the Over-40 and Over-45 Men’s division. While, Samantha Vanderford (Lancelin) was another double winner, taking out the Over-35 and Over-50 Women’s divisions respectively.

Albany’s Paul Dupuy was on fire in the Over-50 Men’s final, backing up his State Title from 2020 with a win in his pet event. Brad Cowan (Margaret River) had to dig deep in an exciting Over-55 Men’s final, pulling out all stops when it mattered most.

In other results from the weekend, Brent Moss (Esperance) took out the Over-60 Men’s final, with Michael Molloy (Geraldton) the best of the Over-65 Men’s surfers.

After a hugely successful start to the 2021 Volte WA Surf Masters Titles presented by SunSmart, all eyes now turn to the upcoming Drug Aware WA Local Trials which will determine which local surfers will get the chance to compete at the WSL Boost Mobile Margaret River Pro which starts on the 2nd May 2021.

Stay tuned to www.surfingwa.com.au for news, photos and updates relating to the 2020 Volte WA Longboard and Logger Titles presented by SunSmart.

About Volte Wetsuits:
Superior technology meets decades of experience. At Volte, their single-minded pursuit is to deliver the best wetsuit experience they can. Volte guarantee the highest level of warmth, comfort and flexibility available worldwide. Check out the full range at: www.voltewetsuits.com.au

END_OF_DOCUMENT_TOKEN_TO_BE_REPLACED

PERFORMANCE BAR RAISED AS THE FIELD IS NARROWED AT KRUI PRO

The 2022 Krui Pro World Surf League (WSL) Qualifying Series (QS) 5000 event has has witnessed another huge day of competition today with the the...