The 2022 Krui Pro World Surf League (WSL) Qualifying Series (QS) 5000 event has has witnessed another huge day of competition today with the the field narrowed to only eight men and 32 women as Ujung Bocur continued to dish up flawless surf in the four-to-six foot range.

Coming from the South West of Western Australia, Willow Hardy (AUS) is no stranger to solid, powerful surf, and today it showed, as the young goofy-footer went to town in the long solid walls of Ujung Bocur. Hardy has only been competing at the QS level for a few months but is looking certain to lock in a career best result here at the Krui Pro.

American competitor Ella McCaffray (USA) posted the highest score of the women’s Round of 48 with a strong display of backside surfing. The super fast natural footer looked at home in the long lefts, stringing together a multitude of combinations to progress into the Round of 32 here in Indonesia.

Japanese competitors Sai Maniwa, Nanaho Tsuzuki, Mahina Maeda, Sumomo Sato, and Julie Nishimoto, all progressed into the Round of 32 at the Krui Pro also. Japanese Olympian Maeda is one to watch moving towards Finals Day as she dominated her way through to the Round of 32.

“It’s definitely a lot harder out there than what it looks,” Maeda said. “It’s just very different to what we have had all week and I guess it’s the swell angle. I’ve had a tough start to the year on the Challenger Series so I’m keen to make some heats here and build some confidence. Qualifying for the Olympics was a highlight for me over the last few years and I know I have it in me to make it to the CT so I just want to get on a roll and start it here in Krui.”

In Heat 5 of the Round of 32 Indonesian hero Rio Waida (IDN) and former Championship Tour competitor from Australia Soli Bailey (AUS) put on an absolute show. Both surfers excelled in the powerful surf, lighting up Ujung Bocur’s long lefts with explosive backhand blasts. Waida took the heat win scoring an event high 9.50 with an 8.27 backup. Bailey advanced in 2nd position with an excellent 8.33 in his scoreline.

“It’s big and powerful out there and from the shore it looks fun, but it’s much harder when you’re out there,” Waida said. “At the start of the heat there were some big sets and I wasn’t sure if I was in the right position. Then I got that 9.50 which is the best way to start a heat. It’s so good for the Indonesian surfers to have a QS5,000 in our country, I hope they’re all watching and getting fired up. I want to see more Indonesian surfers in the Challenger Series.”

After winning their Round of 16 matchups, Bailey and Waida will now meet up in the Quarterfinals in what will be a battle of the two event standouts.

Aussie youngster Jarvis Earle (AUS) was another breakthrough performer at Krui today, posting an excellent two-wave total of 16.23 for his incredible and electric display of frontside surfing. Jesse Mendes (ITA) continued his run towards the finals along with Kiwi Billy Stairmand (NZL) who looked to be in searing form on his backside on the long lefts of Ujung Bocur.

WSL Event Officials will reconvene and make another call at 6:30 a.m. local time for a possible 7:00 a.m. start.

The 2022 Krui Pro will run at Ujung Bocur from June 11-17. Be sure to tune in and watch it live at www.worldsurfleague.com or on the free WSL App.

About the WSL
Established in 1976, the World Surf League (WSL) is the home of the world’s best surfing.

A global sports, media and entertainment company, the WSL oversees international tours and competitions, a studios division creating over 500+ hours of live and on-demand content, and via affiliate WaveCo, the home of the world’s largest high performance, human-made wave. Headquartered in Santa Monica, California, the WSL has regional offices in North America, Latin America, Asia Pacific, and EMEA.

The WSL annually crowns the men’s and women’s surfing World Champions. The global Tours and Competition division oversees and operates more than 180 global contests each year across the Championship Tour, the development tiers, including the Challenger, Qualifying and Junior Series, as well as longboard and big wave properties.

Launched in 2019, WSL Studios is an independent producer of unscripted television projects, including documentaries and series, which provide unprecedented access to athletes, events, and locations around the world. WSL events and content are distributed on linear television in over 743M+ homes worldwide and across digital and social media platforms around the world, including WorldSurfLeague.com

WaveCo includes the Surf Ranch Lemoore facility and the utilizing and licensing of the Kelly Slater Wave System.

The WSL is dedicated to changing the world through the inspirational power of surfing by creating authentic events, experiences, and storytelling to inspire a growing, global community to live with purpose, originality, and stoke.

END_OF_DOCUMENT_TOKEN_TO_BE_REPLACED 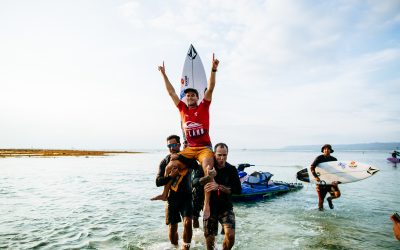