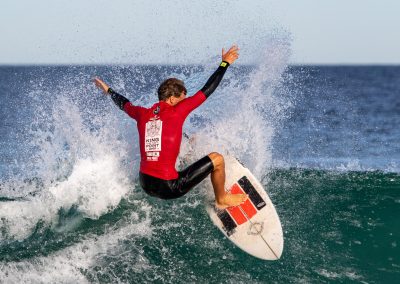 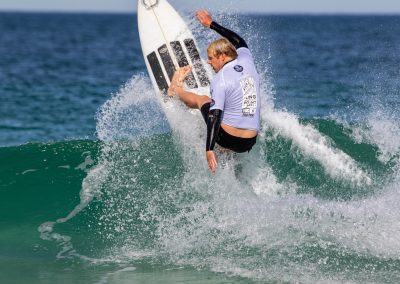 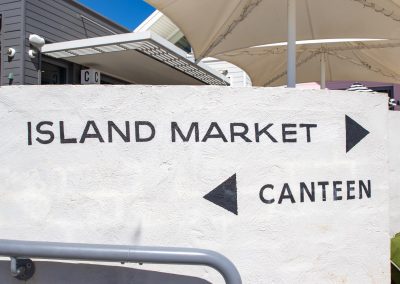 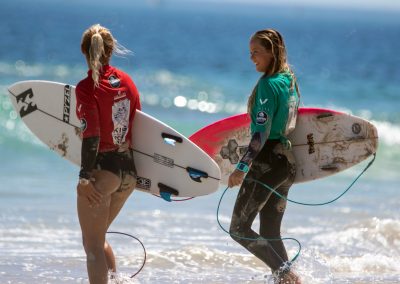 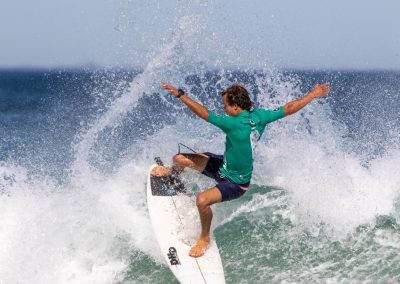 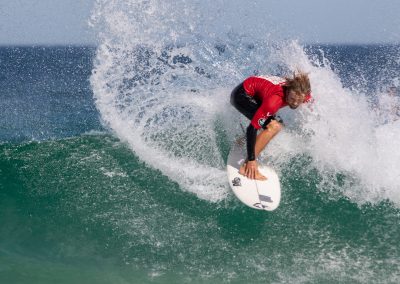 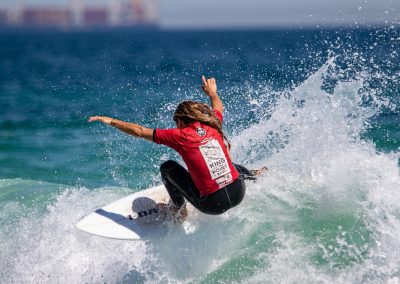 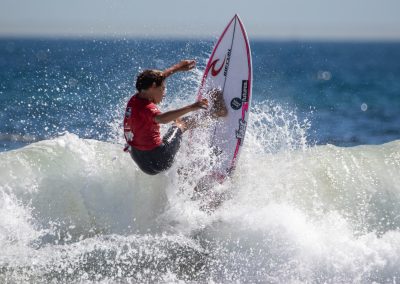 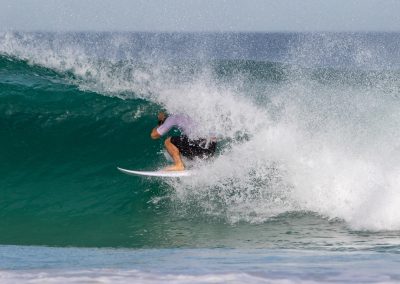 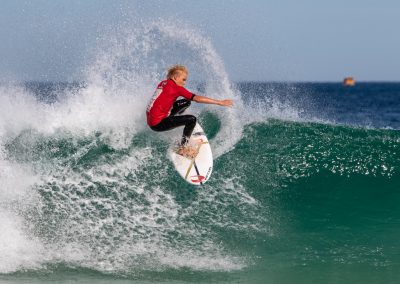 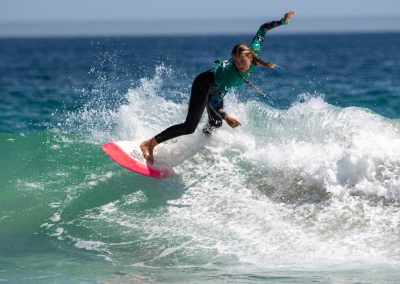 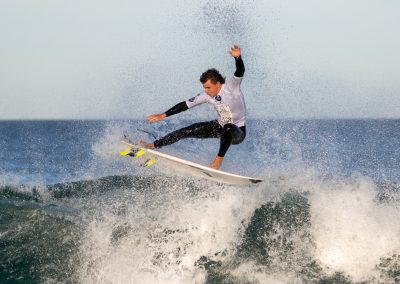 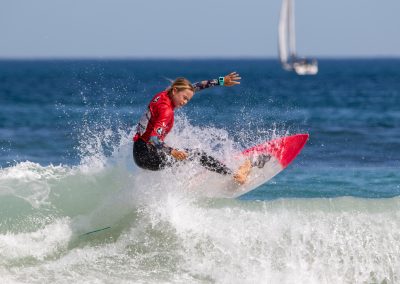 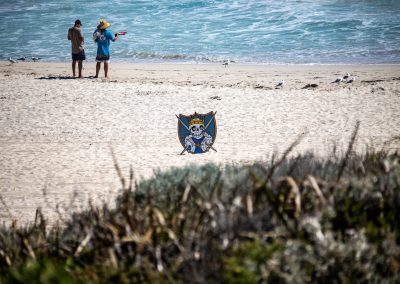 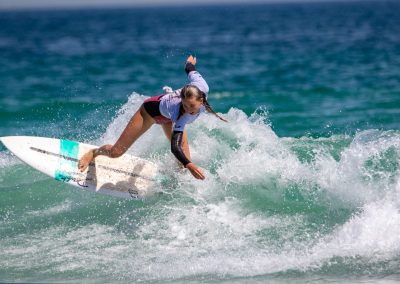 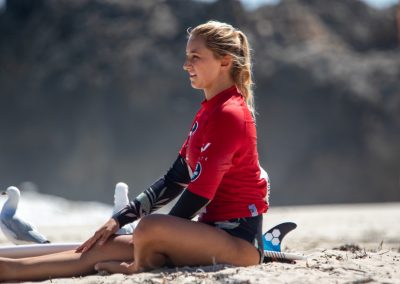 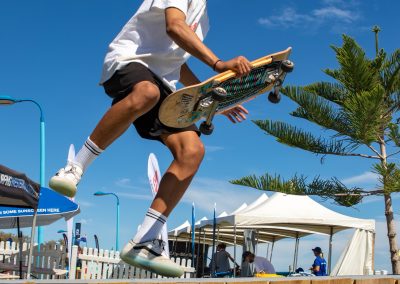 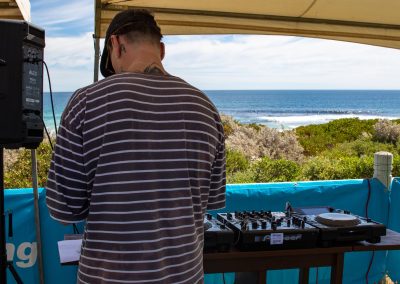 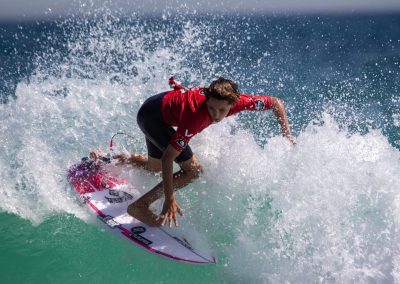 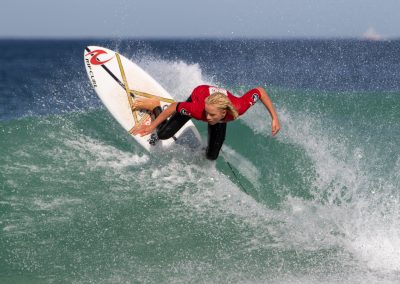 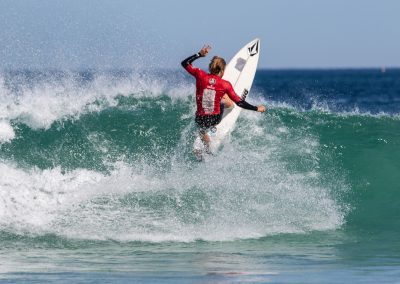 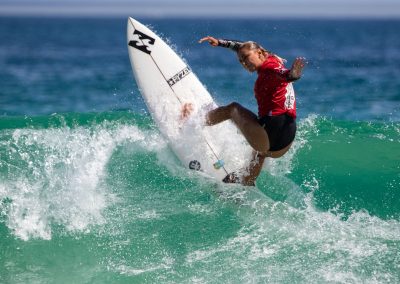 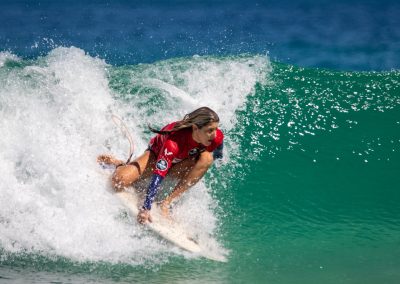 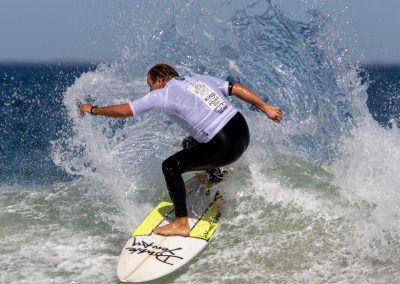 The Corsaire Aviation King of the Point presented by the City of Stirling kicked off today with better than expected conditions on offer for Perth’s premiere surf tournament. Clean 2-3 feet waves greeted a field of elite local and regional Western Australian surfers who converged along the metropolitan beaches for the chance at a royal bounty of over $10k in cash and prizes.

As the temperature soared over 36 degrees so did the performance levels, as surfer did their best to extract the maximum scores from the summer-like waves that rolled through all day long.

Queen of the Point semi finalists were decided, as an impressive group of WA ladies battled hard through shifting afternoon tides and winds. In an exciting mix of experience and energy, the Queen of the Point division saw multiple generations of female surfers hit the waves off Trigg.

Former WSL Championship Tour (CT) surfer Claire Bevilacqua (Yallingup), was excited to be back in competition and surfing in front of her friends and family.

“Trigg Point is one of the hardest places to get a wave in WA, but on its day I think it’s actually a really, really fun spot, I think it’s a pretty high performance wave,” said Bevilacqua. “Its was great to pick off a few sets and its just nice to have a contest here in Perth.”

Jed Gradisen (Gracetown), Jake Hagan (Geraldton), Jack Mitchell (Margaret River) and Solomon Pogue-Englert (Gracetown) dashed all hopes for the locals and booked their place into the Prince’s final, which should be a glimpse into the future of the sport here in WA. While, Maverick Wilson (Dunsborough), Jack Lacey (Duncraig), Travis Barkhuizen (Eglinton), Jesse Siedmiogrodzki (City Beach) were the best of the young surfers and will feature in the Jester of the Point final tomorrow.

First run back in 1979, the King of the Point is one of WA’s most iconic events, boasting an impressive honour roll of past champions including Mike McAullife (Margaret River), Dave Macaulay (Gracetown), Jake Paterson (Yallingup), Claire Bevilacqua (Yallingup) and Jacob Willcox (Margaret River) to name just a few.

Tomorrow’s final action is set to be red-hot, with two highly sought-after positions into the Drug Aware Local Trials, the precursor to the World Surf League (WSL) Boost Mobile Margaret River Pro, on offer for the King and Queen of the Point champions.

There will be plenty happening out of the water too, with activities and entertainment for the whole family all day long. As well as exciting surfing matchups, there will be amazing food and refreshing drinks on offer at Canteen and Island Market, the Vans skate & create zone, live DJ’s, the Tamla Legends premiere, a 360-degree VR (virtual reality) surf film experience, treasure hunts as well as surfboard and fins test areas.

Surfing WA will be streaming live heat scores and results from the King of the Point so people can follow the event anywhere on the planet. Be sure to check out www.surfingwalive.com.au

Surfing WA reminds all our travelling competitors and families of the dangers of sending a text message or using a mobile phone while behind the wheel. The #NoTxtNoWrecks message is supported by our road safety partner the WA Road Safety Commission.

For more information on this or any other WA event be sure to log onto www.surfingwa.com.au and use the hashtag #KingofthePoint to interact with Surfing WA across their social media platforms.

About Corsaire Aviation:
Corsaire Aviation operates an aircraft fleet out of a first class hangar based at Jandakot Airport. Visiting extraordinary destinations throughout Western Australia and mainland Australia, an ultimate experience is waiting for you with Corsaire Aviation. More information at www.corsaireaviation.com.au

Taj’s Small Fries presented by Board.Store has concluded in a memorable fashion over the weekend in Yallingup, with eight champions battling big...

END_OF_DOCUMENT_TOKEN_TO_BE_REPLACED

It was marathon day in Yallingup as Taj’s Small Fries presented by Board.Store continued quite literally in Taj Burrow’s front yard, with a total of...

END_OF_DOCUMENT_TOKEN_TO_BE_REPLACED

The 17th edition of Taj’s Small Fries presented by Board.Store, kicked off this morning at the spiritual home of WA’s most prestigious junior...

END_OF_DOCUMENT_TOKEN_TO_BE_REPLACED

Excitement is building as Western Australia’s biggest, best and most prestigious junior surfing tournament prepares for a start, with Taj's Small...

END_OF_DOCUMENT_TOKEN_TO_BE_REPLACED

Over the weekend of the 4th and 5th of December, the Yallingup based Indian Ocean Longboard Club hosted its 37th annual Yallingup Malibu Classic at...