Some of Western Australia’s best big board surfers are set to converge on the Peel coastline later this week, for the West Coast Suspensions Longboard & Logger State Championships presented by SunSmart.

Surfing WA last held a Longboard State Title at Avalon back in 2020 and the hiatus as attracted a diverse demographic of competitors from across WA. With a total of 16 separate divisions on offer, the State Longboard Championships has attracted a strong field of local contestants, plus those travelling from Perth, the South-West, Mid-West and Great Southern regions to compete.

The event is stacked with talent, with many past State and National Title champions attracted to the allure of the long running waves of Avalon Bay. All competitors will be out to secure a prestigious State Title and for the opportunity to represent WA at the Australian Surfing Championships scheduled to run in NSW in August.

It will be on for surfers both young and old, with great conditions forecast for divisions ranging from Under-18 Juniors through to Over-70 Super Kahunas. The event will provide a festival style atmosphere, as families, friends, and old surfing buddies get together to share waves, stoke and surf stories.

Many local Peel surfers are set to compete on home soil including; Brendan Collins (Falcon), Zali Cory (Falcon) Indigo Mackenzie (Secret Harbour) and Lindsay Small (Baldivis), who’ll all be out to benefit from the home ground advantage.

“Avalon is such a fun wave,” said Spencer. “As a goofy footer, I’m looking to surfing on my forehand and the forecast is shaping up really good, I can’t wait to throw on a vest again, it’s been a while for me.”

While in the Women’s divisions, Georgia Young (Perth), Emily Gibbs (Yallingup), Amanda Curley (North Beach) and Samantha Vanderford (Greenhead), will be doing their very best to defend State Titles from 2021.

Surfing Western Australia’s Events Manager Justin Majeks is looking forward to the event saying, “It’s a great opportunity for our longboard community to get together again and the forecast is shaping up nicely,” he said. “There’s new names in almost every division so it’s going to be exciting to see some new surfers mixing it up alongside some of our established competitors.”

The forecast for the event is looking positive, with a good groundswell and favourable winds set to make for an exciting three days of competition surfing. Heats will commence from approximately 9am on Friday with finals set to take place over the weekend.

Surfing WA will be streaming live heat scores and results for people to follow via their new live event site: ww.surfingwalive.com.au. Stay tuned to www.surfingwa.com.au for news, photos and updates relating to the 2022 West Coast Suspensions Longboard & Logger State Championships.

END_OF_DOCUMENT_TOKEN_TO_BE_REPLACED

The 2022 Australian National Titles calendar gets underway at Bells Beach when the Australian Indigenous Surfing Titles returns to Wadawurrung...

END_OF_DOCUMENT_TOKEN_TO_BE_REPLACED

The Margaret River Pro, the fifth and final stop before the Mid-season Cut on the World Surf League (WSL) 2022 Championship Tour (CT), has seen a...

END_OF_DOCUMENT_TOKEN_TO_BE_REPLACED

Australian surf photography has continued to go from strength to strength in the past twelve months as evident in the epic submissions for the 2022...

END_OF_DOCUMENT_TOKEN_TO_BE_REPLACED 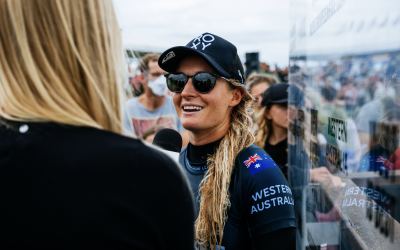 The Margaret River Pro is fifth and final stop before the Mid-season Cut on the World Surf League (WSL) 2022 Championship Tour (CT). After this...